Top 15 Differences Between Windows 7 and Windows 8

Windows 7 was released back in 2009 and this really was a huge jump from its predecessor, Windows XP. Masses readily accepted this change and in no time it was Windows 7 everywhere. But with the launch of Windows 8, trend is not that rising as it was earlier in the case of Windows 7.

It is not that Windows 8 is a fail launch but the main reason behind this is the reluctance towards adopting new features when users are already satisfied with previous ones. Also another important parameter is that, most of the people still don’t know what is Windows 8 and its features, except the word Metro UI. So we have compiled this detailed post about top differences between Windows 7 and Windows 8 for you so that you may have a look at what you actually have in your OS and what you can get if you go for an upgrade.

You are already familiar with the start menu button in Windows 7 but did you know that it has gone in Windows 8 and all you get is this Start Screen by default. This is actually the Metro UI, we talk about, with tiles. Though this interface is more user friendly for tablet users but still you can enjoy its features with the help of your mouse and keyboard. 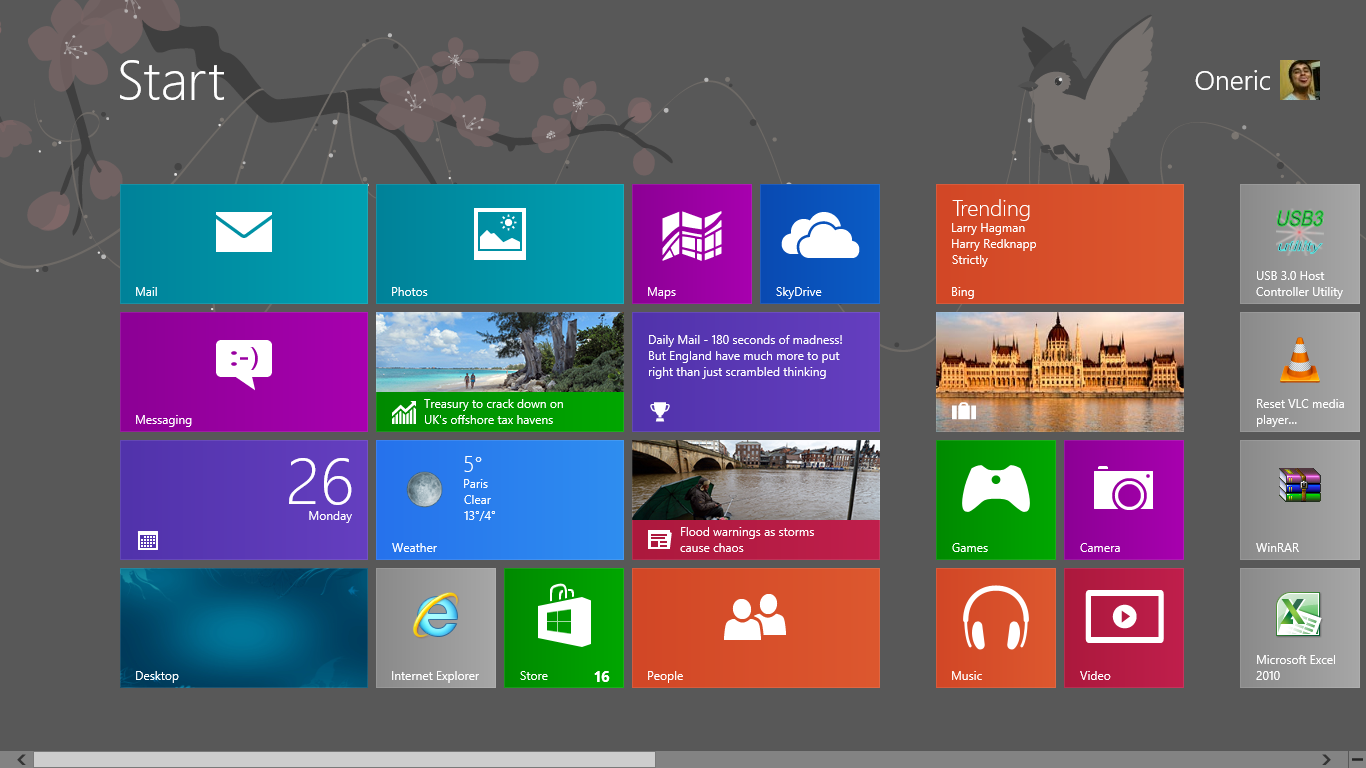 It is said that in the latest versions of Windows 8 or may be via some update, Microsoft will also add the conventional Start button in windows 8 as well but that will be just an option. Default styling of Windows 8 would still be Metro UI. Still if you are not feeling comfortable with this start screen, you can always get Windows 7 like start menu in Windows 8 with third party software.

Windows 8 has a more simpler task manager as compared to Windows 7. It displays you a box with the running apps and a button to kill them and that’s it. 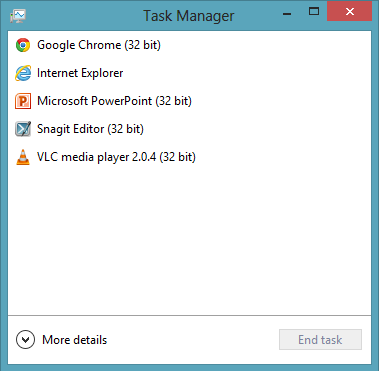 But still if you remember, Windows 7 had more tabs such as Processes, Performance, Networking etc. which are not visible in above screenshot. Well, simply click on More details in the bottom left corner and bingo, you will see even finer version of task manager with more details and yes they are actually categorized. 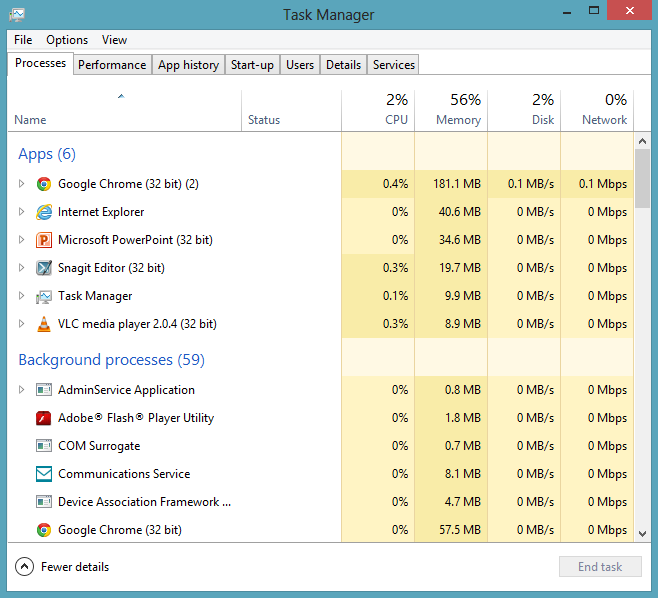 Moreover, if you move on to Performance tab, you will see that now the whole CPU usage is shown as a single entry instead of each core performance. So overall, you will be in love with this new and neat task manager of windows 8.

If you know what the heading suggests, the conventional dialogue box to show copy or moving progress of data has been replaced with this new and awesome display of graph. 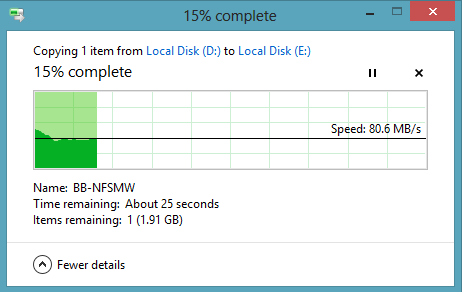 Not only this but you also get only single dialogue box even if you are copying more than one thing. So that you don’t have to move around and monitor each dialogue box separately, Windows 8 combines them into a single window. 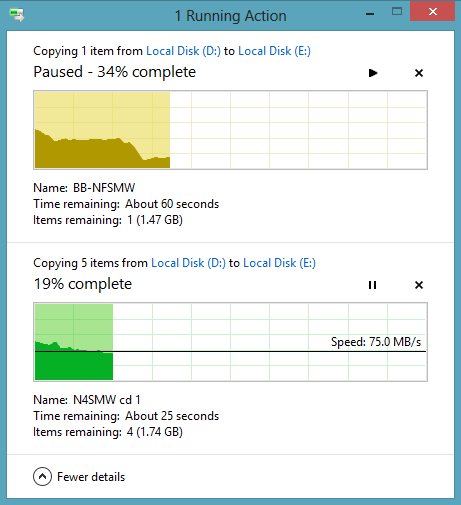 Also did you know that you can actually pause the move/copying operation if you have some more urgent task to do and then resume it later. In the above screenshot we have paused the first copying operation while the second is active. This feature was not included in windows 7.

Windows 8 has more improved windows explorer as compared to Windows 7. Actually the same “ribbon interface” has been adopted here which was first introduced in Microsoft Office 2007. 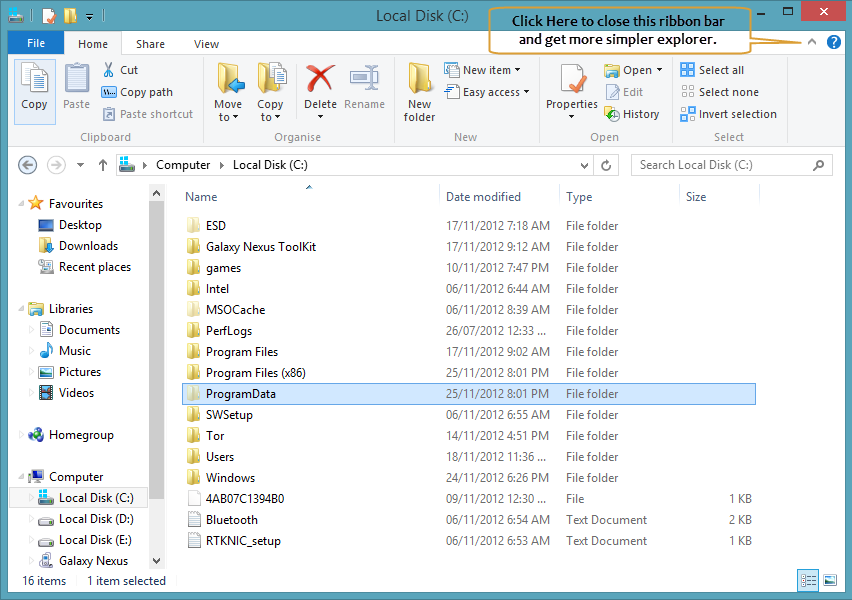 This new ribbon is actually very helpful and saves your time during some project. For example if you wanted to show hidden files in Windows 7, you would either go to Folder Options in Control Panel or from top menu bar such that Tools > View > Folder Options but here all you need to do is to move to View tab and there you will find a simple check box to show/hide hidden files. Not only this but you will get to know many features as you continue using the new explorer, and yes if you do want the ribbon bar to appear, simply hide it from the small arrow highlighted in the above screenshot.

You can use your windows live account to sign in to Windows 8. This will actually help you keep things on the cloud so that all your files, settings and personal preferences such as bookmarks, desktop wallpaper etc. will be stored in your live account and you can use them at any other PC with Windows 8. 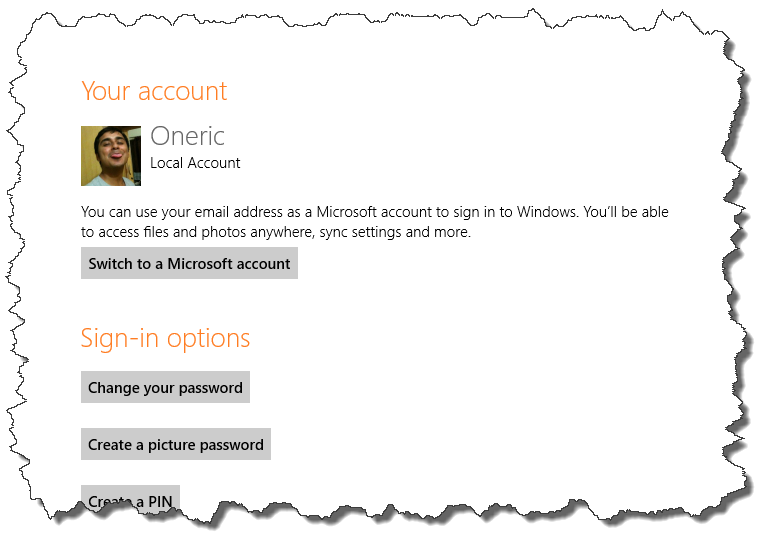 This will also help you keep your files with you when you are on the go because SkyDrive has been integrated with Windows 8, all you need to do is to setup it and keep your files on the cloud. Also this is not the only method to sign in to Windows 8, you can still use offline account to sign in with conventional password security or the new Picture Password in Windows 8.

Users always try to get minimum possible boot time for their PC’s so that they don’t have to wait around while Windows is loading. This has been keenly kept in consideration while designing Windows 8. Windows 8 will boot in half time or even less than that as compered to Windows 7 on your same PC. This is because Windows 8 has combined the cold boot and hibernation process in such a manner that even if you shut down or reboot your computer, it will provide you a new session with all apps closed but at the back end, Windows will behave as if it is resuming from hibernate state, making it to consume far less time. 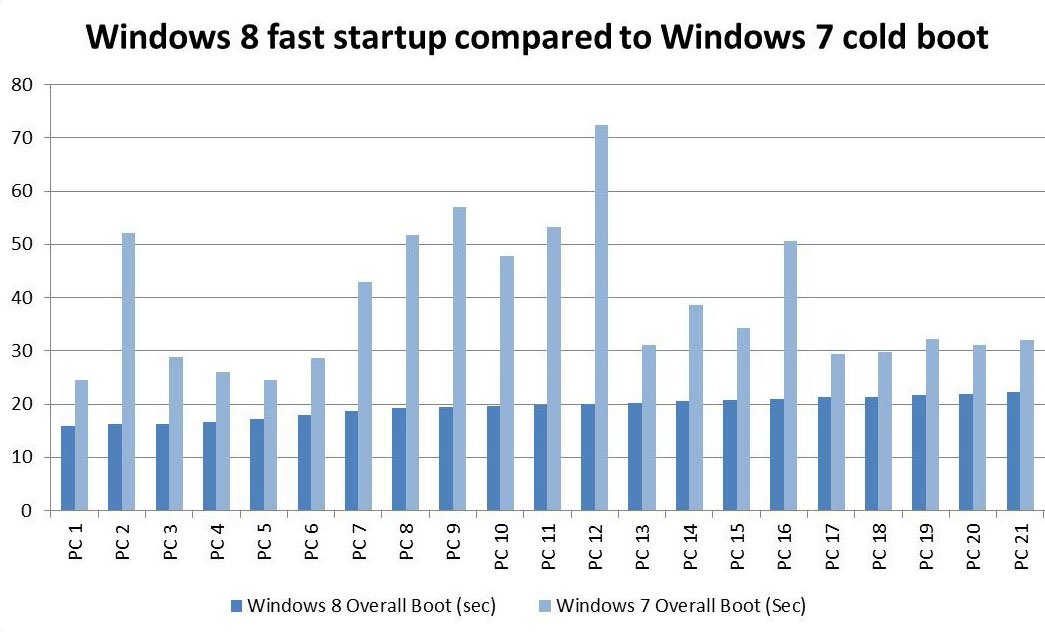 Windows 8 comes with a built-in antivirus to provide you maximum security so that you don’t have to install it yourself. The conventional Microsoft Security Essential (MSE) has been integrated in Windows 8 as Windows Defender and works both as anti-spyware and antivirus. Though Microsoft Security Essential(MSE) is also available for Windows 7 and is free but you have to manually install it from Microsoft website. 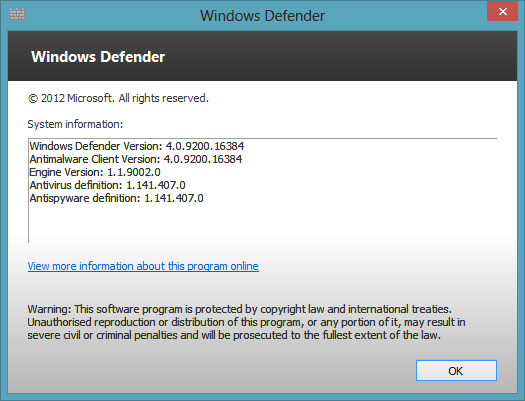 With Windows 8 you get Internet Explorer 10 both in desktop as well as Metro UI version. You will see that Internet Explorer 10 not only provides new user experience but also supports HTML 5 over traditional plugin architecture. Meaning that now with IE 10 metro UI, you won’t need plugins that are required while browsing, for example Flash Player or others. 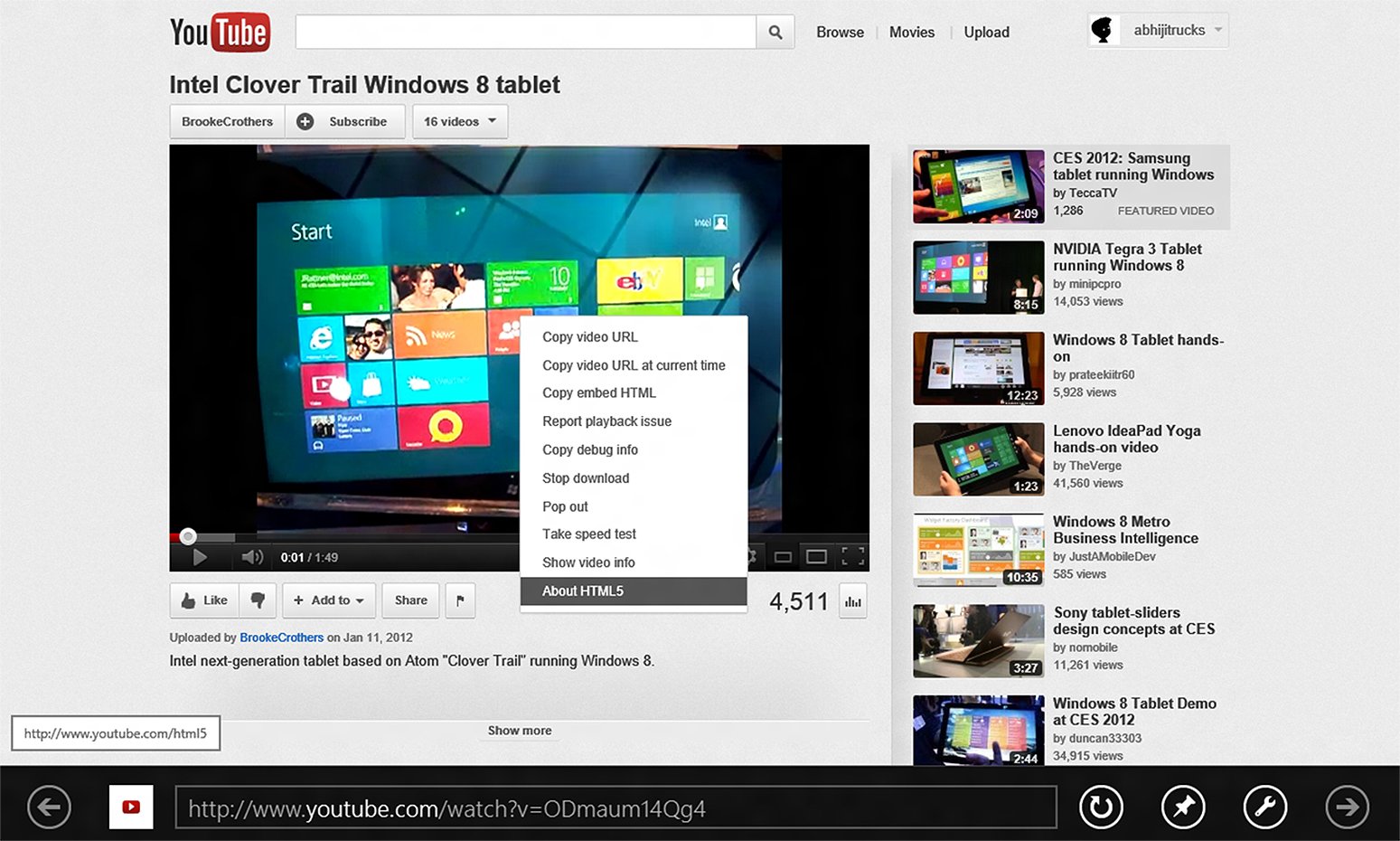 But still if you do want to use some plugin, such as to open YouTube with flash player, you need to switch to the desktop version of Internet Explorer 10. This is actually a big step by Microsoft in ruling out the Adobe Flash Player and other plugins and in near future we may actually be able to witness a total plugin free browsing.

With Windows 8, you get a totally redesigned boot experience which is different from conventional booting in many aspects. Mainly, the boot menu in Windows 8 is actually graphical with user friendly interface as compared to its predecessor Windows 7 which provided the conventional black and white DOS menu. 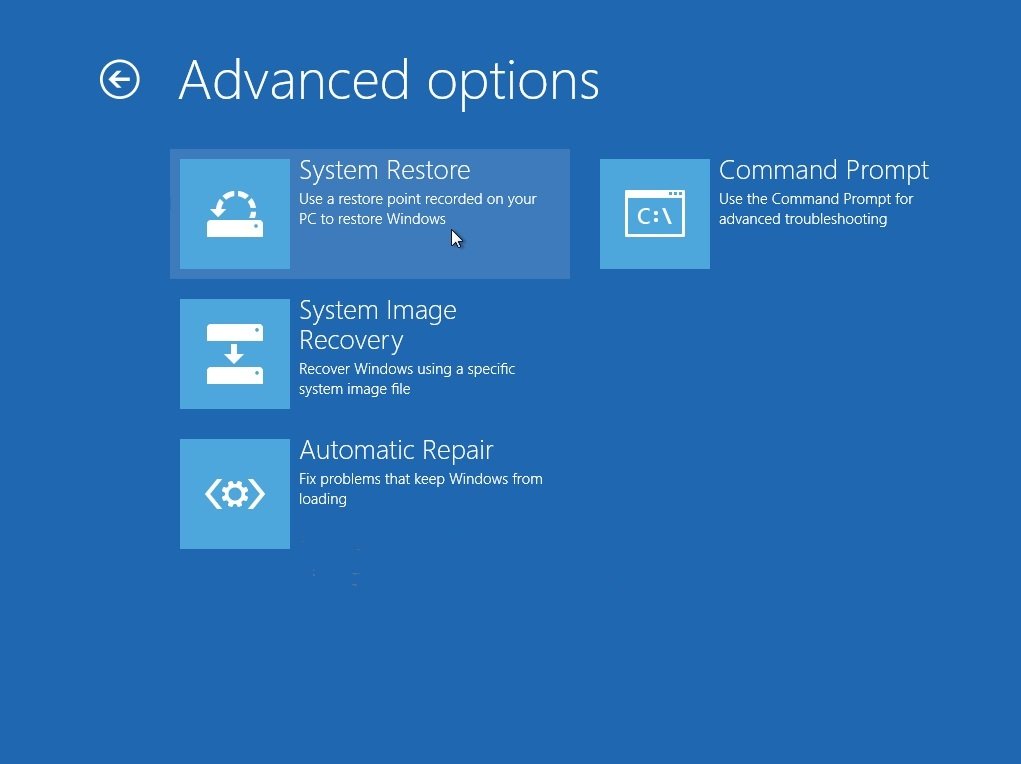 10. Ability to Reset or Refresh Your PC:

Windows 8 also comes with this handy feature that allows you to reset or refresh your PC. Reset will remove all your personal data, files and settings. It is just like re-installing the Windows. While in Refresh Mode, Windows makes a backup of your data, settings and apps (Metro apps only) and re-install windows. Once the re-installation is done, Windows restores this backup. 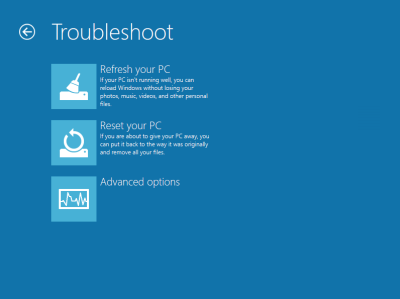 Windows charms are actually the new features provided to add to the ease of computing. You can get charms to appear on your screen by moving the mouse pointer to upper left or upper right corner on desktop or by swiping from the right if you are on a touch enabled device or by pressing Windows + C keys . These charms are provided to give quick access to many features such as accessing Start Screen, searching for an app, settings to change volume, connecting to a WiFi network and many others. 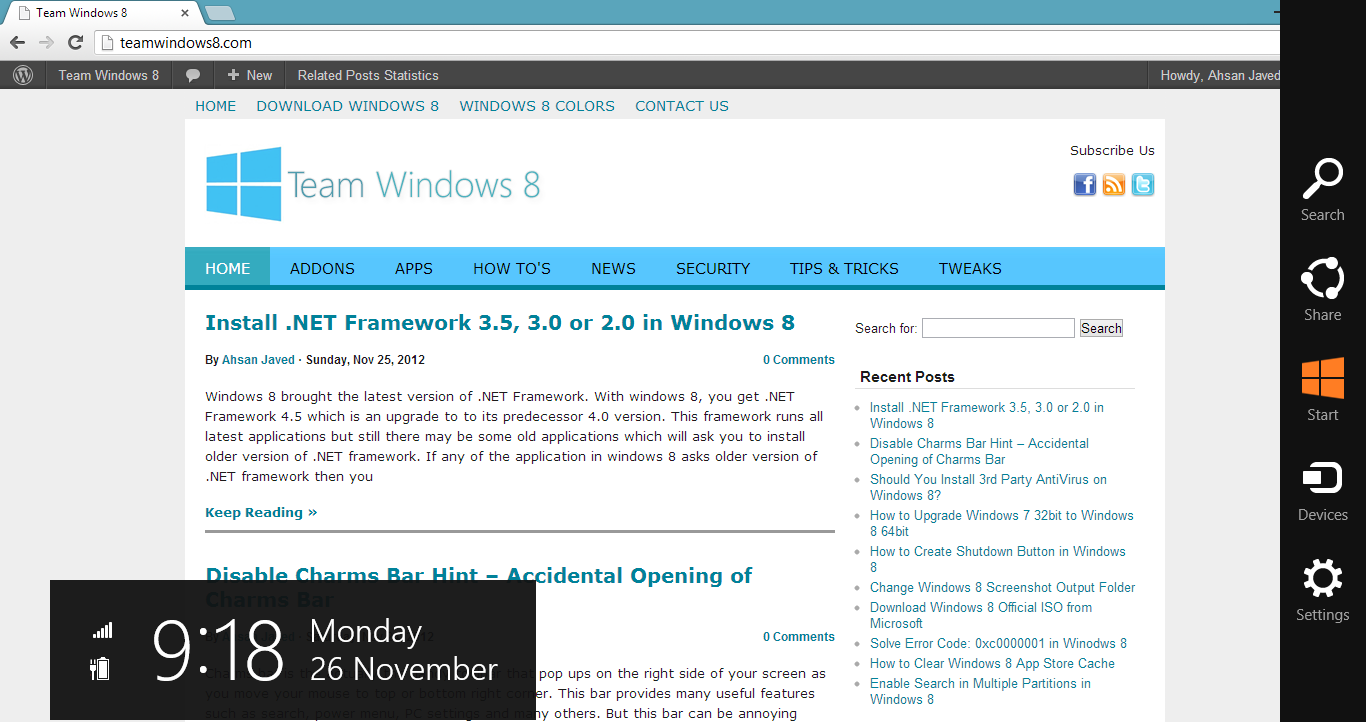 Windows 8 has brought the Microsoft App Store which is a key part of this new release. This store provides both free and paid apps and modern as well as desktop interface. This is just like Apple’s app store or Android’s Google Play. Simply launch the store from your start screen and search for the apps that you want to download and install.

Windows 8 by default has this awesome feature of auto-scaling according to screen size, resolution and pixel density. So with this features, Windows 8 smoothly runs from a small windows phone to large wall hanging LCD’s. Considering this feature, apps in Windows 8 are said to be designed in such a manner that they also auto-scale considering the screen size so that the amount of data showed on the screen may be varied. 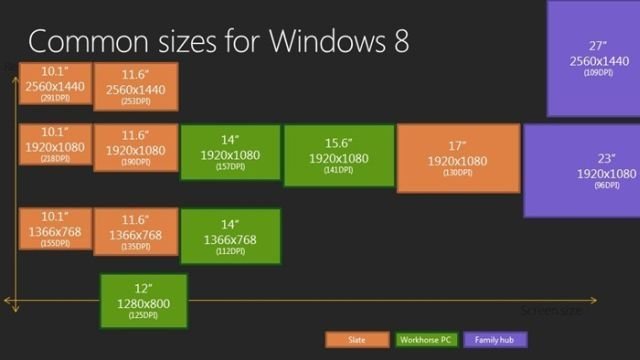 Windows 8 has brought a completely new type of security for Windows users i.e. Picture Password. Now with the help of Picture Password, you can set specific secret patterns on your desired pictures so that they are known to you only and work as a password. This type of security was not available in previous versions of Windows. You can follow our complete guide on how to setup picture password in Windows 8. 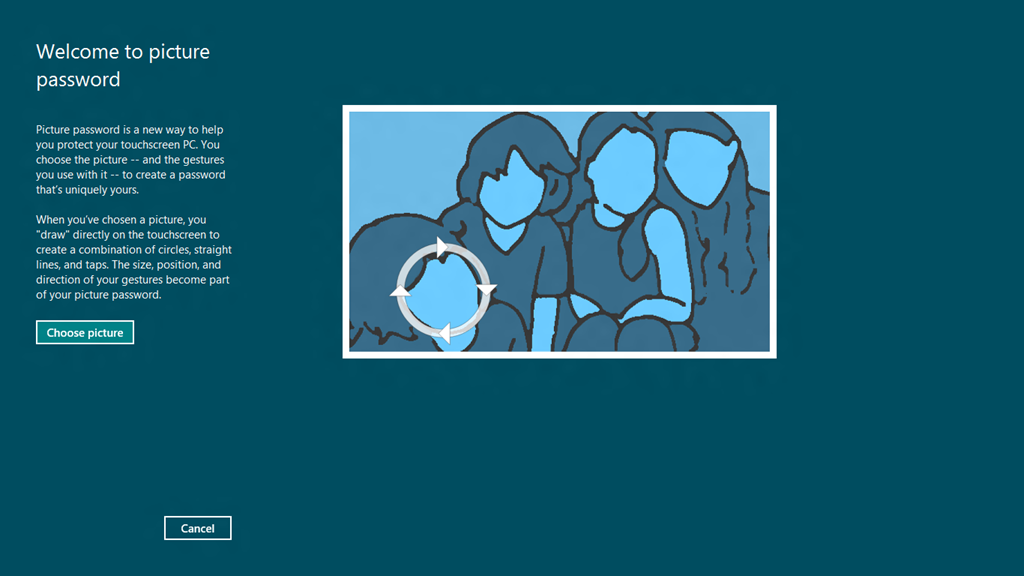 Snap feature in Windows 8 allows to snap a certain application or program to one side of the screen while other part can be used to open another app. This feature becomes very handy when you are reading from one document and typing in the other. Simply open them side by side and you don’t have to switch between windows all the time. This feature is also supported by Metro apps so that you can run two apps side by sides without having to switch between them.

For example in the following screenshot we have opened weather app alongside maps so that you can see both of them at the same time and you can simply click on any of it to bring to the larger part of the screen. 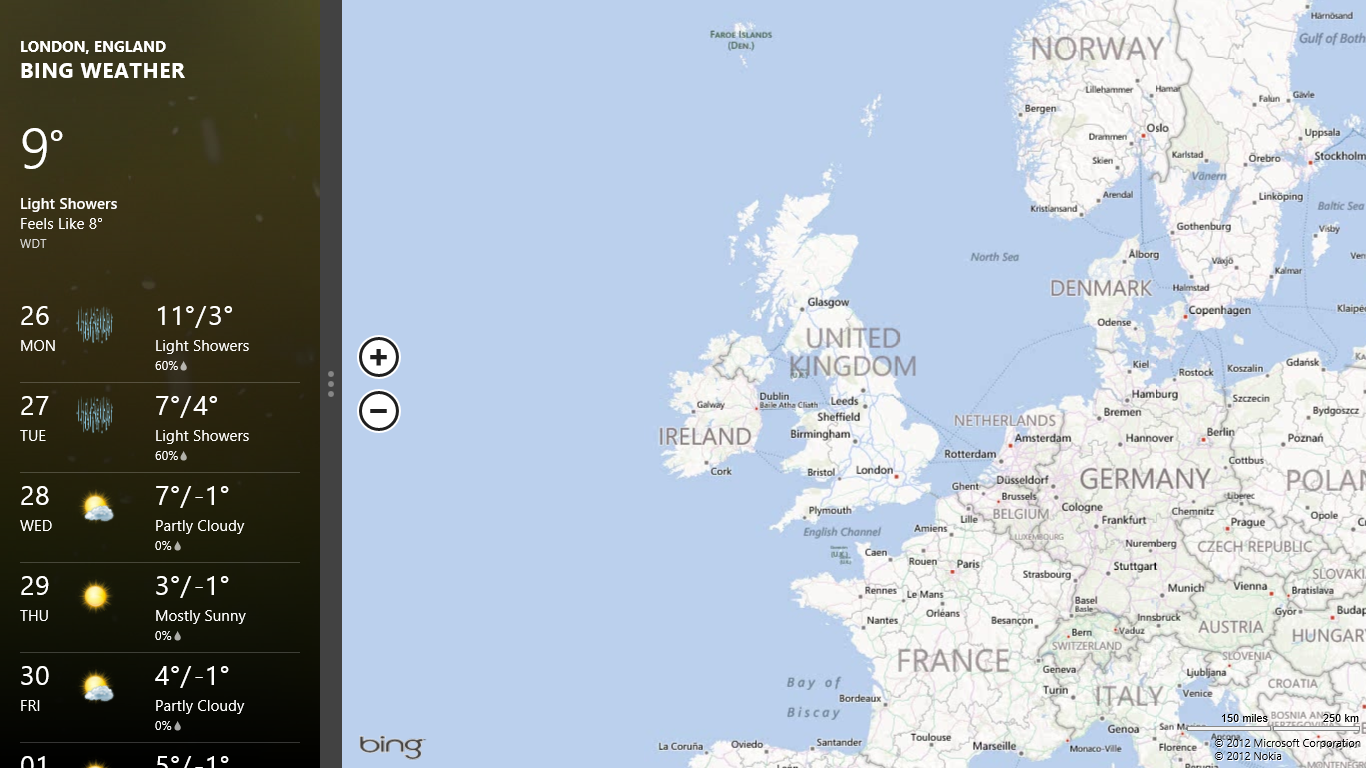 To be honest, one cannot list all the features of Windows 8, that Windows 7 didn’t have, in one post. Everyday is a new discovery and surely there are many features which may still be unknown to most of us and will come to surface while using Windows 8. For example the feature of Windows 8 to mount ISO’s by simply double clicking was not known to me before I unintentionally discovered it.  So here we have listed only few of the salient features that actually make the Windows 8 to be the next generation of Windows.

Take Instant Screenshots in Winodws 8 with Windows...
Enable “Pin to Start Screen” Option for any Object...
Sync Your Local Music with Windows 8 Xbox Music Ap...
How to Burn ISO Files in Windows 8 Without Any Sof...