Windows 8 to Get Security Patch for Remote Code Execution

Microsoft has announced that Windows 8 and Windows RT will get their first security patch this Tuesday.

These security patches are to fix the recent loopholes discovered in Windows 8 by Vupen Security Team. The news came to surface when the security company tweeted about the windows 8 Zero day exploit and made it available for sale. This security path will fix on “remote code execution” that will prevent hackers to execute codes remotely.

This release is expected to include six security patches, four of which are considered critical, one important, and one moderate. Most of the fixes are aimed at the Windows OS, but one also covers a flaw in Internet Explorer 9 and another a hole in Microsoft Office 2003, 2007, and 2010 for the PC and Office 2008 and 2011 for the Mac.

How to Get these Updates:

If you have enabled automatic updates by default, these patches will automatically install on Tuesday. Or you can do it manually by searching for “windows update” in your control panel: 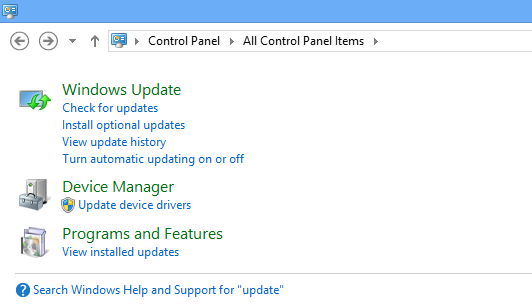 There you can find the option of “check for updates” or simply click on Windows Update to change the settings and setup the updates to be installed automatically.

Should You Install 3rd Party AntiVirus on Windows ...
Windows 8 Uses BIOS to Store Your Product Key
First Security Bug Found in Windows 8 is Up for Sa...
Microsoft patches Critical Vulnerabilities in Wind...